I tested the new Break-Away rocket twice at the last NEFAR launch on September 12.
Jimmy Yawn shot video and posted the first B6-4 flight.
To see the launch and recovery, CLICK HERE
Scroll down to the Break--Away.

EDIT: The C6-5 Break-Away flight has also been posted. Thanks go to Jimmy Yawn.
Posted by Chris Michielssen at 6:18 PM No comments: 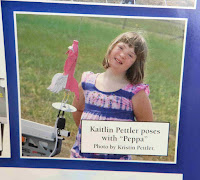 From the NSL 20015 coverage in Sport Rocketry -

The Odd'l Blast ceramic blast deflector was featured on the Rocket News and New Products page.
The Little Green Man is spotted in the JonRocket ad.
Posted by Chris Michielssen at 3:16 PM No comments: 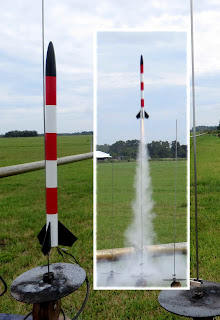 First up with an Estes B6-4 to an estimated 350'. The second C6-5 flight reached 700'. Stable and true!
Ejections popped the model into six segments and it recovered horizontally.

Here's the model after landing with no damage.
This rocket falls faster than a parachute rocket would making a good small field model. It's recommended that it be flown and recovered on a softer grass field.
I should be able to start on the instructions soon!
Posted by Chris Michielssen at 7:19 PM No comments: