How many do ya' need?

Nose cones can be the most expensive part of a kit.
There's 100 here, a good start for the first run of a new product.
Posted by Chris Michielssen at 9:19 AM No comments:

An interesting Blast! Deflector back story from YORF: 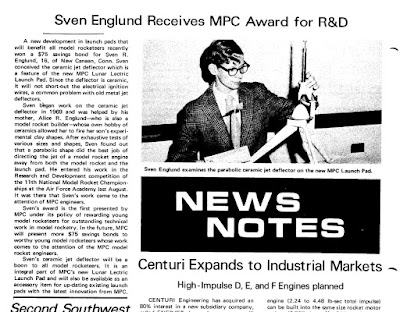 The MPC starter kit pictured earlier featured a unique parabolic blast deflector.  The design made its first appearance as an R&D entry at NARAM 11 submitted by Sven Englund of New Canaan, CT.
This was the very same Sven Englund who was the winner of the Estes "Launch Pad Sweepstakes" which had a trip to see the Apollo 11 launch with Vern Estes as its grand prize.  Methinks that ol' Sven might have been the object of envy by a few thousand rocketeers over that win!
Only a few months later the April 7, 1970 issue of Model Rocketry magazine would report that MPC had purchased the rights to his deflector design from Sven for the princely sum of $75 dollars.  Here's the story from Ninfinger.org:  Model Rocketry Magazine April, 1970 (http://www.ninfinger.org/rockets/ModelRocketry/Model_Rocketry_v02n07_04-70.pdf)
The design is still available today from various model rocketry dealers. (an Odd'l Rockets product!)
***************
Posted by Chris Michielssen at 8:33 AM No comments:

On TRF, Snrkl posted he was building a BT-60 upscale of the Odd'l Rockets Break-Away. He had some questions and a few emails were exchanged.

Posted by Chris Michielssen at 6:26 PM No comments: 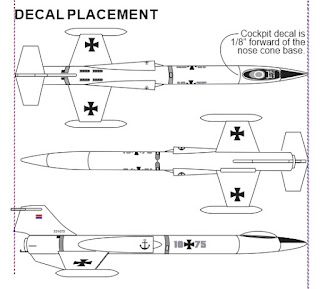 This model is based on one of the out-of-production Centuri Fighter Fleet jets. The intakes and fuel tanks will be closer in shape to the real thing.

When will it be available? Hopefully in the next few months. Kit production and test flights take time, especially drawing up the instructions.
Posted by Chris Michielssen at 10:16 PM No comments: 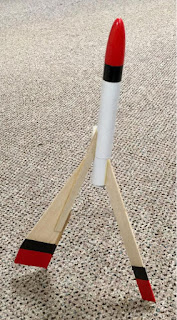 From a post on TRF:
"I am pleased to report that Cyclone II performed flawlessly at the BARC launch yesterday. Don't have any pics yet, hopefully soon.
First launch was on an 1/2A3-2T. It didn't go very high, but high enough to get a good long spin coming down. As promised, the booster unit spins down moderately, while the mapleseed part gets up a pretty good rate of spin and comes down slowly.
Given the huge flat recovery area, I got ambitious for the second launch and stuck in an A3-4T. That got some good altitude, and a nice long spinning descent. Unfortunately I made a stupid mistake and watched the final descent of the booster piece while asking others to keep an eye on the mapleseed. They *all* lost sight of it, so after some searching I was becoming resigned to having lost it, until some time later my Dad located it somewhat further away that I imagined it could have traveled. So thankfully it's all back together safe and sound.
The takeaway: in the future I personally will focus exclusively on the mapleseed part, and not trust anyone else to follow it. The booster unit doesn't drift that far and should be easy to fine. The A3-4T was a great engine for a launch at a large club field, with easy recovery areas, but for smaller fields definitely the 1/2A3-2T is plenty.
All in all a very fun rocket, I look forward to flying it some more."

Great to hear Neil!
I've seen a Cyclone spin and drift out of sight on a A3-4t before.
At my local soccer field launch I had a prototype drift and land in someone's back yard on the 1/2A3-2t.
Definitely keep an eye on the upper half. The lower half tends to land much closer.
I'm happy to hear of your success, many are surprised how well it helicopters in with no real moving parts.
Posted by Chris Michielssen at 10:28 AM No comments:

Email ThisBlogThis!Share to TwitterShare to FacebookShare to Pinterest
Labels: Flight Report, OR Cyclone 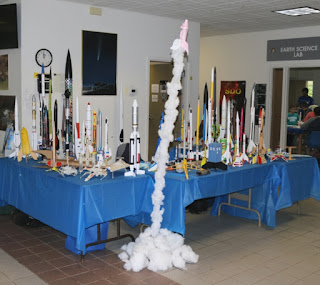 From a recent post on YORF, Les showed off just part of his collection -

"Not the complete fleet....
A few weeks ago, Kopernik Observatory held its annual Rocketfest.
I put on a display of some of my rockets
This is about half of my collection from nearly 20 years of builds. Enjoy!"

That's an Odd'l Pigasus on top of all that smoke!
Posted by Chris Michielssen at 8:36 AM No comments:

Email ThisBlogThis!Share to TwitterShare to FacebookShare to Pinterest
Labels: Customer Pictures, OR Pigasus

The bomb or tank wing details on the Odd'l Rockets F-16 kit were a compromise. Being a small vendor I certainly couldn't afford to have molds made for short run kits. Carved dowels were used for the larger tanks under the wings. They look good, but the shape could be better. 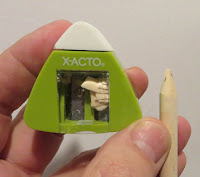 Using a pencil sharpener, knock off the rear end. You don't have to make a real sharp point, just remove some of the excess dowel. 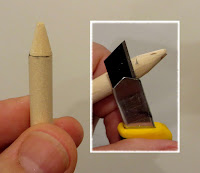 On the left, the edge to be removed was marked with a pencil. 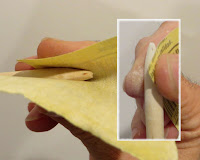 Wrap some 220 grit around the dowel and turn it against the sandpaper like a slow moving lathe.

After that, sand up and down as shown in the inset picture. 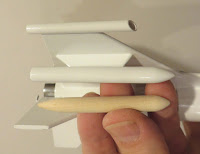 Here's the new shaped tank next to the F-16 tank. Both look fine but the new shape is better and more streamlined.
Posted by Chris Michielssen at 5:13 PM No comments:

An email from Giovanni:

I got it all finished up (just needed to tie the segments together).
My kids helped pick the colors.
Thanks again for these fun designs!
Giovanni
Posted by Chris Michielssen at 11:30 AM No comments:

Email ThisBlogThis!Share to TwitterShare to FacebookShare to Pinterest
Labels: Emails, OR Break-Away 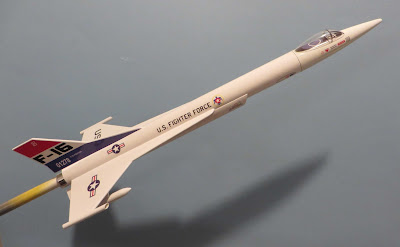 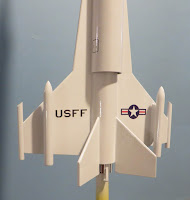 Well it's about time! This one took a while . . .
Too many prototypes, too many trashed canopies, design revisions and many test flights.
Jon Rocket will have them today (Saturday), Apogee will have kits in a few days.
Thanks for your patience, I think this one is worth the wait!
Posted by Chris Michielssen at 7:51 PM No comments:

I recently bought a small vacuum forming machine for the F-16 clear canopies.
Getting the best thickness of plastic, finding the correct temperature and the right moment to turn on the vacuum takes some time - and trashed canopies!
Here's twenty I made yesterday afternoon. On the lower right is a cut and ready finished canopy. 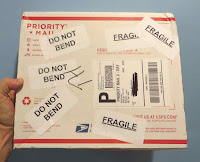 The F-16 kit will have water slide decals!
I ordered 100 sheets from decalpaper.com. My only gripe was the way they have shipped previous orders, in a plain envelope. The decal paper was folded to fit in my mailbox.
In the comments section of the online order form I asked for the paper to be shipped in a flat box. This is what I received!
Posted by Chris Michielssen at 10:02 AM No comments: 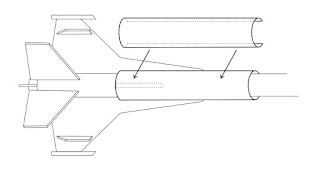 I've started work on the Odd'l Rockets F-16 kit instructions. This drawing shows the gluing of the intake scoop on the bottom of the model.
Instructions are really the most time consuming part of kit production. It would also be the most expensive! I'm fortunate to have a background in graphic arts.
My kit instructions are old school and hopefully answer all construction questions during the build.
Posted by Chris Michielssen at 9:06 AM No comments:

Work continues on the new F-16 Fighter Fleet kit.
A big hurdle was making a workable clear canopy. I didn't want to go the easy route and include one made of card stock. What really set off the Centuri kit was the clear canopy with the decal details underneath.
After many revisions and test flights the real work starts on the instructions.
Posted by Chris Michielssen at 8:10 PM No comments:

Here's just a small part of a big kit order from Sirius Rocketry.
All the couplers and tubes in the re-designed Odd'l Break-Away kit are hand cut.
These are longer than the available 1" couplers. At 1 1/4" long the segmented rocket stands straighter on the launcher.

This is only 11 sets from the 25 kit run I put together.
That's a whole afternoon of measuring, sanding and cutting.
I wore out a few razor blades in the process.
Posted by Chris Michielssen at 5:14 PM No comments: